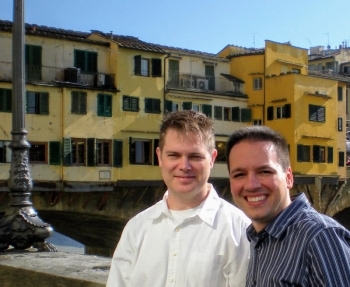 We could think of nothing better than starting from the beginning – the journey to find Fonte Martino.  Every fire starts with a spark, in our case an Italian spark, so the next few posts tells our story.

You could say this all began well before the idea of moving to Italy was even on the horizon.  We’ve been together since 1996 and almost immediately fantasized about one day running a guest house or a restaurant.  Initially, it seemed that life had other plans and careers in mind for us.  We both found ourselves in higher-level positions and achieved a great many things to be proud of, but we still kept dreaming.

Jump ahead a few years when we went on our first trip to Europe – Italy to be more precise.  We are both of Italian decent and have since become dual citizens of the US and Italy (that is another story).  Having watched Under the Tuscan Sun so many times that we annoyed each other with quotes from the movie, we could think of no better place for our first Italian trip than to visit Tuscany and specifically Cortona, the town featured in the movie.  It was a complete dream come true.  We had a fantastic time and because we were so completely naive, we also decided to look at properties!  If Frances could do it (from the movie), why couldn’t we?  Oh, that’s right, we are not characters in a movie!!!

After reality set in, we realized there was quite a bit more to buying a property and moving halfway across the globe than just finding an old farm-house ruin and rebuilding it.  But, we were bit by the bug and over the course of many additional trips, we held on to the dream.  With each trip, we learned more and more.  We eventually stopped looking at Italy through vacation goggles and starting looking at it with opened eyes, and much to our surprise, we had even more drive to make our dream a reality.

Jump ahead to August 2016.  What a special month for us…you see, it was our 20th Anniversary!  What better place to celebrate than in the country we fell in love with – Italy.  As we planned our trip, we began communicating with a realtor.  We had no expectations of finding a property that would eventually become our new home, but fate had other plans for us and we found Fonte Martino!