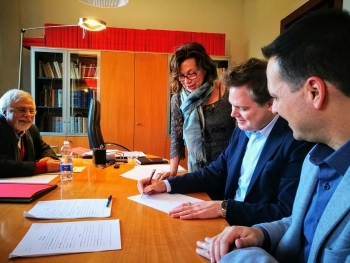 It’s now February 2017 and time to travel to Montepulciano and close on our new home, Fonte Martino. There is a scene in the movie Under the Tuscan Sun when Frances Mayes buys Bramasole, her house in Cortona. She is at the notary’s office, there are a few documents that have to be rubber-stamped, a sip of espresso, and that’s it. Francis asks, “Just like that?” and it’s met with “It’s a house, not a Vespa. What are you going to do, steal it?” If only it were that easy! Don’t misunderstand us, although it was a challenging process, it was an amazing cultural experience that we will never forget.

Our closing took four hours to complete! We went to the notary’s office for the closing and were accompanied by our friend/realtor Cristina, our banker Andrea, the previous owner of Fonte Martino, his friend, an interpreter, the notary, and several other assistants. At any given point in time, there were ten to twelve people present during the closing.

In the States, a notary is basically someone who witnesses the signing of a document to verify the signers. In Italy, a notary is someone who needs to verify every letter, word, and punctuation mark on a document, as well as the people signing it. It is a very prestigious position and if anything is determined to be incorrect, the burden to correct it and any liability lies solely with the notary. It is not a profession to be taken lightly. 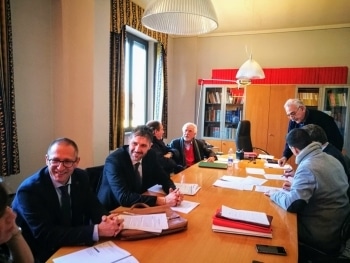 Our notary was wonderful. She had the style, elegance, sophistication, and beauty of Sophia Loren. She also had the patience of a saint dealing with two Americans completely unfamiliar with the closing process. Every word on every page of every document was both read in Italian and English. All corrections were noted and the notary’s assistants scurried off to make the corrections. Once the final documents were prepared, they were once again read over in Italian and translated to English to ensure accuracy. After their accuracy was confirmed, all parties present signed each and every document. This resulted in us needing physical therapy for our hands!

With the closing finally completed, we were now the proud owners of Fonte Martino and three beautiful acres in Tuscany! A few people started leaving the notary’s office, including the previous owner. As we were preparing to leave, we gathered up our documents and looked around for the keys to Fonte Martino, which were nowhere to be found. It seems the previous owner left and forgot to leave us the keys for the new house we just bought!  Seriously…?