The Gate, The Keys, and Laughter… 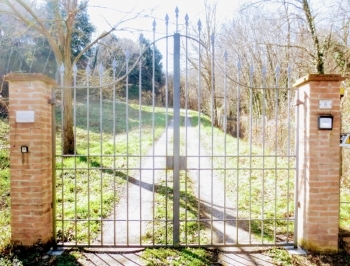 Those three words are some of the most comforting words ever spoken. However, when you are in a strange place, thousands of miles from where you normally place your head on your pillow, it stirs up a lot of emotions. Some wonderful emotions and some frightening ones, but knowing we have a new home makes it much easier.

It was the day we were meeting with the previous owners, Marco and his wife. Cristina (our piccola scimmia) was there to help translate for us. Marco and his wife were still staying at Fonte Martino until their movers arrived, which would be a few days later. Marco was a proud man and his wife, although cautious at first, was very welcoming. They expressed how pleased they were that we purchased this special place they called home for decades.

Marco invited us to sit at a table with him, but that didn’t last long. He soon was scurrying from room to room, floor to floor, outside and inside the house to show us everything. What keys went with which locks – there were keys to the front doors, the back doors, the shutters, the electrical panel, the water shutoffs, the heating system, the garage, AND there were even keys to the pig sty! At one point, we looked at each other and immediately knew what the other was thinking: how would we be able to keep all these keys straight?

One of the funniest experiences was when Marco was teaching us how to work the front gate – which we didn’t have to heart to say we were replacing (future story to come!). The front gate had a key for the padlock, a key for the main electrical circuit that goes to the house, a key for the left side of the gate to access the mechanical controls, and a key for the right side of the gate to do the same. As it turns out, the manufacturer of the gate components is called FAAC. Every time Marco would refer to the manufacturer, he would not say F-A-A-C, but rather say a word that was identical to that one particular mother of curse words in the English language. Being completely juvenile, we along with Cristina laughed almost uncontrollably every time has said it. “Here are the FAAC keys.” “This FAAC key opens this door.” “This FAAC key is for this control.” This went on for quite a while until the near 70-year-old man devilishly said in Italian, “I know what I am saying…”

We continued learning as much as we could from Marco. We really enjoyed our time together sharing stories of our families and of the time they spent at Fonte Martino. It was a really special moment for us, yet we could only imagine what they must have been feeling. It was a new era for them and they were entrusting us with this special place they created and enjoyed for many years. We promised them we would take great care of Fonte Martino and fill it with life, love, and laughter.

What a memorable experience discovering the intimate details of our new home from Marco and his wife. Fonte Martino will finally be ours in just a few more days…