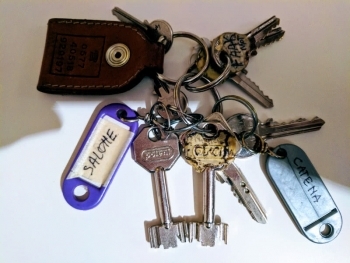 A new house in beautiful Montepulciano and no keys – that about sums up where we were!  We traveled thousands of miles, spent countless hours in meetings and negotiations, just finished the closing process which took about four hours to complete, and finally owned Fonte Martino…BUT NO KEYS!  Actually, as funny as that was, the day after we closed, we had a meeting scheduled with the previous owner to learn about the house and hoped to receive the keys.

One of the quirky things about closing on a property in Italy compared to the States is that when you get the keys in the States, the owner has completely vacated the property and you can go in – it’s yours.  In Italy, it’s a bit different.  The previous owner had some trouble with his movers and consequently could not vacate Fonte Martino until the Friday after the closing – three days later!  Strange, we know, but what other options did we have but to be flexible.  When in Rome…

Seeing Fonte Martino for the first time as its new owners was a surreal experience.  This was the first time we saw the house since September 2016.  As we were driving to the property, thoughts swirled in our heads.  Would we still love it?  Is it as perfect as we remembered?  Did we make a mistake?  Did we buy a money pit?  Xanax!

As we approached the front gate to the property, we rang the buzzer and waited.  The gates slowly swung open and we drove up the driveway. We were actually entering our property.  Around the first bend, the neighboring olive grove appears.  Around the second bend, we began to see the main house coming into view.  As the house fully appears, we got butterflies in our stomachs.  The house is just as we remembered…magical!  We continued driving around the house, parked in the courtyard, and once again saw the most amazing view of Montepulciano directly in front of us.

The previous owner met us in the courtyard.  He invited us into our house and almost immediately got down to business.  He was an architect by trade and from our experiences, was very well organized and detailed.  We sat down on wooden chairs around a square plastic outdoor table, conveniently placed in the living room…  He had a notebook in front of him with pages of hand-written notes.  The first thing he did was hand us a very large set of keys.  This was just one house, how could there be so many?  Well, to our surprise, this set was just the first because we actually received about 100 more keys spread out on a cookie sheet!

So, we started with no keys and ended up with over a hundred.  We didn’t care, we were home…